How do you picture yourself in the universe?

Carl Sagan, the host of the PBS series “Cosmos,” which was seen by half a billion people, said this: “Every one of us is, in the cosmic perspective, precious… in a hundred billion galaxies, you will not find another.” 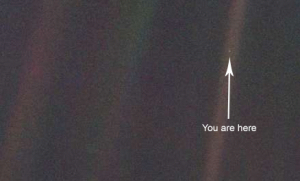 As
As Voyager 1 sped away from earth at 40,000 miles per hour, reaching the edge of our solar system and the maximum limit for radio communication with Earth, Sagan asked NASA to have the spacecraft’s camera turn around and face our solar system to take a family portrait from 3.7 billion miles away.

It took 5 ½ hours for each pixel to be radioed back to Earth. The result was the picture called, “Pale Blue Dot.” It shows Earth in the vast expanse of space.

Sagan said this photo helps put into perspective our place in the universe. He said, “Our planet is a lonely speck in the enveloping cosmic dark. In our obscurity, in all this vastness there is no hint that help will come from elsewhere to save us from ourselves.”

And again, Sagan said, “Take a good long look at it. Stare at the dot for any length of time and then try to convince yourself that God created the whole Universe for one of the 10 million species of life that inhabit that speck of dust.”

Well, long before the Voyager photo, long before modern astronomy, astrophysics, and cosmology, the Bible’s authors knew that we are, in fact, small. The psalmist in Psalm 8 sings:

O LORD, our Lord,
how majestic is your name in all the earth!
You have set your glory
above the heavens.
When I consider your heavens,
the work of your fingers,
the moon and the stars,
which you have set in place,
what is man that you are mindful of him,
the son of man that you care for him?
You made him a little lower than the heavenly beings
and crowned him with glory and honor.

Today with the anniversary of the moon landing, it may be a good time to reflect on your place in the universe through God’s lens in Scripture, and through the camera of Voyager 1, and adjust your life accordingly.

Carl Sagan was right in saying that each of us is precious. Yet during the brief time he traveled on this pale blue dot, he missed the big picture. Jesus indeed came to “save us from ourselves” and to lead us to someone and somewhere more grand than the creation we can see.