Home » The Origination Of Snow

The Origination Of Snow 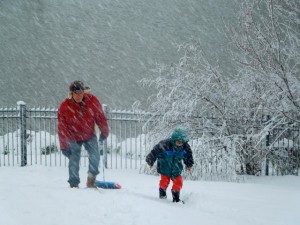 A snowstorm changed the landscape here this week. My wife said, “God is amazing. He can do anything.” The local meteorologist, however, attributed the snow to a low-pressure system. So who was right, my wife or the meteorologist? Could they both be right?

Does a biblical explanation necessarily contradict a scientific one? C.S. Lewis would say, not necessarily. He gave this example. Lewis said that if upon entering his home you asked, “Why is it that pot of water on the stove is boiling?” Lewis said that he could answer the question in one of two ways and that both would be true.

1) He could talk about how the laws of thermodynamics could explain the boiling tea kettle, and why it is whistling.

2) Or, he could just say, “The water is boiling because Mrs. Lewis wants a cup of tea.”

The answers are complementary, not contradictory. Each answer speaks to a different aspect of the question.

Similarly, the Bible can express a point of view complementary to science, not contradictory. For instance, the Bible says this:

“For you created my inmost being;
you knit me together in my mother’s womb.
I praise you because I am fearfully and wonderfully made;
your works are wonderful” (Psa. 139:13-14).

God knit each of us in our mother’s womb. He created our inmost being. But does that mean we cannot believe in fertilization, a cell dividing into two and eventually into a billion? Does Psalm 139 preclude us from understanding that half of our genes come from a father and half from a mother and that they are bundled up as a set of 46 chromosomes?

No. The Bible’s way of describing the miracle of human growth can complement a scientific understanding.

Here is another example from the Bible, one of the weather. Christians believe that God is in charge, that he constantly holds the universe together. In doing so, however, God can use secondary causes.

The Bible tells us that God causes the rain to fall on the just and the unjust. Does that mean that rain does not come from clouds? Of course not. The prophet Elijah prayed for rain and to see if God was sending it Elijah sent his servant to look for clouds.

Now, that’s something to celebrate!